Construction of the new multi-million-pound campus at the University of Ulster, Belfast, presented exciting challenges to MGF across several departments including research and development, design and engineering, manufacturing and the operational team who delivered the project from our Head Office in Wigan.

The team developed a heavy-duty prop that exceeded the capabilities of the 1000 series strut (the largest strut in the core hire fleet) to sustain the loadings imposed and span the required 47.3m. The workshop in Wigan, Greater Manchester, manufactured all the required bespoke components in conjunction with construction programme.

Clashes between props and the proposed permanent works disrupted the construction of the cores. MGF worked closely with the SJV BIM team to ensure that clashes were identified before construction began.

“There was a complex interaction between permanent and temporary works. The positioning of props conflicted with the locations of new cores, so the basement structure could not be completed. We worked with the permanent work’s designer and contractor to propose a sequence of works which used the newly constructed permanent works to provide support to the retaining walls. This was key in enabling the high-level props to be removed and construction to continue unimpeded.” explained Stephen Barker, Major Projects Technical Manager.

“We like ordinary rectangles on a site, but there’s not many on this one!” adds Stephen, who led on the design of the basement propping system for the project.

“This is one of the biggest basement excavations we have ever supported. We are using equipment beyond the boundaries of what we usually use.”

The 400 Series, 600 Series and 1000 Series strut systems were used as support to resist the loads and span the basement. A new propping system was developed to clear the longest span, 47.3m long clear end-to-end.

“We carried out the structural design, detailing and manufacture of a bespoke prefabricated steel waling system which was installed to the full basement perimeter, some 345 metres!”

To add to the complications the site is very restricted with a busy city road to the west, so all plans had to meet stringent performance criteria to achieve technical approvals from DRD Northern Ireland.

“None of this is simple.” says Chris Whitworth, who led the operational team on the project.

“That’s why two experienced members of staff were on site over the weekend of the operation to ensure the program ran to plan.”

MGF have supplied 728 tonnes of shoring equipment comprising 74 hydraulic props, 1088 metres of strut extension, 822 metres of steel waling and 275 waler support brackets to enable the construction of the basement structure.

“Over the duration of the job, we supplied equipment on 70 articulated vehicles working in conjunction with the site team to ensure that all of the equipment was delivered on time. It was a very tight site that meant that equipment could not be stored on site – the full project was delivered on a call-off basis. Upon the extraction of the top level of props, we provided 11 vehicles which were lined up on a lane of the closed bypass on a weekend closure. This allowed the site team to remove all 1000 series props and load them direct onto the trailers to clear the site within a working day. There were many challenges, which meant our internal departments had to work closely to ensure we fulfilled all of the requests by the client.” adds Chris.

Construction on the overall £250 million, 75,000 square metre Belfast campus is currently the largest building project in Northern Ireland and may not be ready until at least 2022. Phase 2 will see two new blocks developed on York Street, directly opposite the existing campus building. 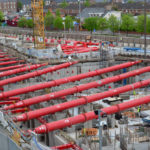 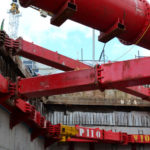 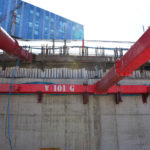 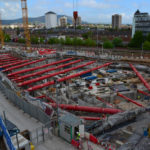 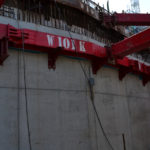 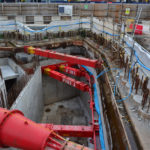 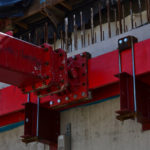 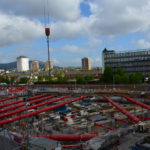 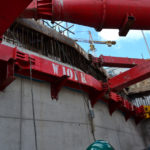 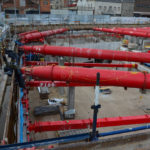 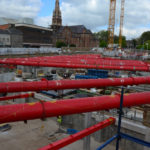 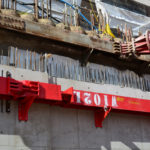